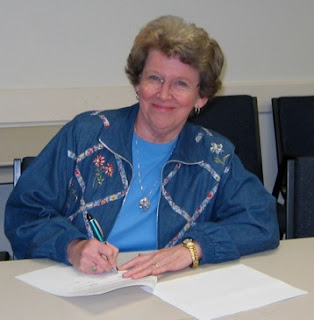 One of today’s popular myths about people who live in the southern part of the U.S.—the states that are known as “the South”—is that we all love to drink sweetened iced tea. The fact of the matter is, I don’t know anyone who drinks sweet tea. I’m sure there are some among us, but everyone I know orders their iced tea unsweetened and then adds an artificial sweetener that has no calories.
So what does sweet tea have to do with writing sweet Southern fiction? Merely that sometimes the writer has to choose between the myth and the reality, especially when the story setting is a small town.
I love writing stories set in small towns in the South, partly because I can create a world where neighbors are always neighborly, traditions are always observed, and people enjoy the simple pleasures of life year round. Among these simple pleasures are social gatherings, such as picnics, cookouts, and church suppers, all of which are excuses for Southern cooks to create their favorite dishes.

Three of my books are set in the fictional small town in Tennessee that I called Barbourville. The most recent of these books, Dealing with Denver, is the story of Denver Vance, one of three triplet brothers. Denver is the most laid-back of the brothers. In fact, when his new friend, Mattie Meadows, first asks him to help her search for her birth mother in Barbourville, he politely declines. After all, he explains, he was just passing through town on his way back to Chicago. But Mattie is determined, and Denver stays around to help. In the process, he’s introduced to some interesting Southern foods, such as buttermilk pie. If you’ve never tried buttermilk pie, you really should. It’s easy and delicious. Here’s a basic recipe.

Food also has a role in the sweet romance I published in February 2012. In Prognosis for Happiness, at the request of his sister, Dr. Trevor Kendall takes a leave of absence from his Hollywood plastic surgery practice to return to the small Tennessee town where he attended high school so he can oversee the medical treatment of his young niece. Only after he arrives does he learn that his niece’s pediatrician is Dr. Gwen Meyer, his nemesis from their high school days. Once back in Brook Haven, he also happily becomes reacquainted with Southern cooking, including (since it’s summer), a delicious cucumber salad one of the hospital employees takes to the annual Mayhew County Memorial Hospital picnic. With summer coming on, you’ll want to try this recipe too.

Chill until ready to serve.

As you’ve probably guessed by now, my recipe for writing sweet Southern fiction involves characters who reflect their small-town heritage, actions that are based on the traditional values of rural locations, and the love of good Southern cooking!

Please welcome Carolynn to Sweet Not Spicy by Leaving a Comment.

﻿﻿
﻿﻿Heather Hiestand is the author of many novels, novellas and short stories and has been published since 2005. She is an Amazon Romance Anthology Bestseller. She lives in Washington with her husband and son. She also writes as Anh Leod. Find Heather Hiestand online:

Housemaid Linet Fenna would rather be an air pirate than a servant. When she finds the ladder to an airship dangling outside her garret window on Christmas Eve, 1892, she ascends to the skies above London on her late father’s flagship dirigible, the Christmas. The new captain is someone she never expected to see again, a dangerous, sexy foe. Is the Fenna family nemesis offering Linet her heart’s desire or a dastardly trap?

Captain Andrew’s motivations are as foggy as the coal-soaked sky. Prime Minister Gladstone’s Blockaders, a horde of automen and a teenage girl named Hatchet want Linet to fail in her quest to discover what happened to her missing family, but she is determined to have a happy Christmas.

Becoming a steampunk author (Confessions of a toddler’s mom) By Heather Hiestand
In late summer 2011, my toddler stopped napping. I went from writing two chapters a week on my novel-in-progress to having no free time at all! I knew I couldn’t keep working on a novel with just a few scattered minutes here and there, like on those rare occasions where he slept in.
Know thyself, right? I know I can’t keep a novel in my head without actual blocks of time available to me. But I didn’t want to stop writing entirely. I had a great idea for a Christmas-themed steampunk novel, but knew my regular publishers required too much lead time to release the story by Christmas. Since I didn’t know how long steampunk was going to be popular, I wanted to get my story out in 2011. This is why I chose to publish it myself. Eventually, a new author friend suggested I try her publisher since they had a shorter timeframe to release and my story exactly fit their guidelines, but I had already purchased my cover so I stayed on the indie path. Things might have been different if I wasn’t friends with a cover artist who was inspired by the etching I found.
This, my first Heather Hiestand indie release, Captain Andrew’s Flying Christmas, came out in mid October 2011, after multiple drafts, several critiques and beta reads, and a proofread by a professional copy editor. It immediately caught the imagination of other steampunk-inclined authors, partially because the cover was eye-catching. I quickly sold past my expectations, based on my recent small press experiences.
At this date, I have nine reviews on Amazon for it, all five stars, which amazes me. The novella reached bestseller status in early December for one day, on the Romance Anthology list. I went on to publish a sequel, Captain Fenna’s Dirigible Valentine. A third story in the series is planned, assuming my child allows me any computer time in the near future!
Amazon:  http://www.amazon.com/Heather-Hiestand/e/B004NG0A98/ref=sr_tc_2_rm?qid=1334005683&sr=1-2-ent
http://www.amazon.com/Anh-Leod/e/B007HNHE8E/ref=sr_tc_2_rm?qid=1334005709&sr=1-2-ent
Smashwords:  http://www.smashwords.com/profile/view/hahiestand
Barnes & Noble:  http://www.barnesandnoble.com/s/heather-hiestand?keyword=heather+hiestand&store=allproducts
Please welcome Heather Hiestand to Sweet Not Spicy by Leaving a Comment.﻿ 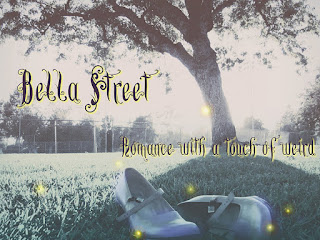 Please leave a comment including your e-mail address for a chance to win a copy of Bella's book, in print or e-version.


Living so close to Nashville has provoked Bella to take up fiddle lessons. Until her tunes no longer sound like amorous alley cats, she writes romance with a touch of weird.

Thanks for having me, Morgan!

Time-travel romance is one of my favorite genres because it shows that love can not only overcome myriad obstacles—it can overcome time itself. Misunderstandings, full throttle emotions, and crazy conflict get kicked up a notch when someone is from another flippin' time.

And the fish out of water storyline is always so much fun.

Whether you want to imagine yourself in older times, with polite manners and formalities, or cutie pies in Tartan kilts, while you're there, you can also save lives with your knowledge of medicine and technology. A caveat—depending on the time period, some might consider your knowledge to be due to witchcraft, so be careful!

Other other end of the spectrum is a character from the past coming forward in time. How do they perceive modern life? What will they understand or misconstrue? Will they want to stay, or go back to what they know? Is their love strong enough to bridge the divide? 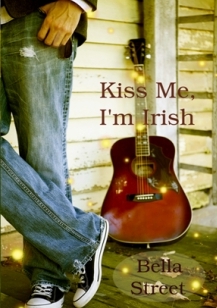 This scenario is what I explore in my 'discreetly sweet' novel Kiss Me, I'm Irish.

Emily Musgrave is heading a direction she never wanted to go in Regency England--namely a convent to turn her from her waywardness. But it's more loneliness than rebellion that motivates her to escape her certain fate.

Liam Jackson is going nowhere fast in modern-day Tennessee. Playing his Dobro in seedy bars and backward dives along with his fiddling sister, Tinker, is doing nothing for his music career--and even less for the dark places in his soul.

Pixie mischief can not only change time-lines, it can change hearts. Because sometimes a girl just needs a little magic in her life.

Emily gets to discover the wonder of shaving cream, nail polish, and band management, all while trying to figure out how to handle her burgeoning feelings for the brooding Irishman and musician Liam Jackson.

And then there are the pixies.

I just need to think this through, to get my bearings. A sudden desire for a breath of fresh air assailed her after hours in the stuffy room. Emily reached for the doorknob.
“I wouldn't go out there alone if I were you.”
She spun around and saw Liam sitting up in bed, shirtless. Averting her gaze, she dropped her hand. “I...I just wanted some fresh air.”
A sound of rustling reached her ears and Liam appeared at her side. She noticed he'd put on a white clinging shirt with short sleeves. The stubble was longer on his face now and his dark hair nearly resembled Tinker's style.
He regarded her from under heavy brows. “I'll come out with you, but just for a minute.” Liam unlocked the door with careful movements, possibly to avoid waking his sister. Opening the door, he ushered her out first. Once they were outside, he closed it quietly behind them. The air was heavy and warm and smelled of a mixture of hothouse blooms and decaying rubbish.
The light made Emily squint at first, but when she got used to it, she looked up and down the street, struggling to reconcile how she could be in another time. But how could a dream or hallucination be so fantastic and detailed? She turned to her host. “What are all those poles with strings on them?”
His brows arched as if it were the last question he expected. “Those are power poles. You know, they carry electricity from house to house. It's how we turn on the lights without...a flame.”
“Electricity,” she said slowly, looking back up at the wires. “I once attended a house party in Surrey where they had a Galvani machine. We all held hands in a circle and one of the members turned a crank on the machine. Then we each received an unpleasant electric shock. Is it anything like that?”
He stared at her without answering. Emily returned his gaze, realizing this was the first time she'd seen him in full light. His hair was coal black and mussed from sleep. His skin, tan and ruddy, as if he were a field laborer. And his eyes were the intense blue of a milkwort blossom, with a telltale darker ring around the outer edge of the irises. Of course! With a name like Liam she should've realized it sooner. He wasn't a gypsy at all.
He was an Irishman.
That meant this was some form of purgatory. Jem, Donnelly, and Our Lady of the Portal had had their revenge after all.


Please leave a comment including your e-mail address for a chance to win a copy of my book, in print or e-version.
Posted by Morgan Mandel at 4:08 AM 11 comments: