R.T. Wolfe writes romantic suspense stories that manage to touch the hearts of her readers as well as their intellect. She lives in the Midwest and is a loving mother to her boys. She enjoys working in her gardens and spending time training her Golden Retriever and writing in and around each of these.
Thank you, Sweet Not Spicy, for having me on your lovely blog today!

Insights from the sub conscience of the heroine…

Brie Chapman has learned to handle just about anything. Witnessing the murder of her parents had that effect. Knowing the arson attack had been meant for is the one thing she can’t learn to handle. Instead of dwelling, she buries herself in the teaching job she loves by day and the soil of the landscaping business she owns by night. Her distractions might be more effective if it weren’t for the dream. 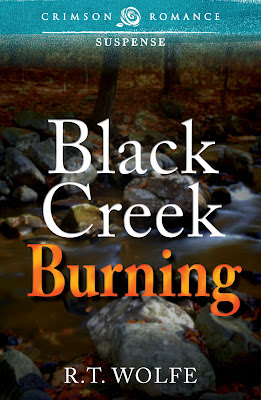 She relives the night of the fire through a vivid recollection in the form of a reoccurring dream. It’s always the same, taking her painfully slow through each decision she made that, had she done things differently, could have saved her parents…all the while knowing what she would witness at the end of the nightmare. However, as much of the style of many facets in Black Creek Burning, her dreams evolve.

Nathan Reed inherited his two young nephews after the death of his only brother and sister-in-law. Living on the high of his nationally renowned woodworking artistry studio, after four years with the boys, he realizes he is failing as a parent. Determined to keep his promise to his brother and to his nephews, he sells his studio and moves back to upstate New York in order to be closer to the boys’ only other living relatives, their grandparents. He finds a historic, rundown farmhouse and moves the three of them in with the idea of rebuilding the beauty as he builds lifelong memories with the boys. Behind the farmhouse is Black Creek. Behind Black Creek is a classic Victorian and a puzzling brunette.

Patiently, he and his adorable nephews maneuver around Brie’s aloof demeanor and into her heart. As they do, the dream begins to change. She starts to remember small details about the suspects, giving both her and the reader an insight into the mystery behind who murdered her parents…all the while the suspects are determined to finish the job.

Black Creek Burning twines evolving into more than just Brie’s dreams. As her character evolves, so do the seasons and with it the plants that are so dear to her. Nathan, too, changes as a parent in tandem with the rebuild of the historic farmhouse into a mission-style wonder. Even the development of the children grows as they learn to love their uncle and trust their new neighbor.

Book one in the Black Creek romantic suspense trilogy, Black Creek Burning was released just this week in all ebook forms and will be available in print in a few months. On my website is the first chapter and links to Brie’s landscaping tips and Nathan’s woodworking pieces. Book two, To Fly in the Shadows, will be released February 1, 2013 and the third, Dark Vengeance, on July 1, 2013, but don’t worry, there are no cliff hangers in any of R.T. Wolfe books. R.T. Wolfe website


As she meandered up the path to their house, she felt queasy, like she’d done this before. Nervously, she glanced over her shoulder through her mass of wavy brown hair as she kept moving toward the front door.
Two people were walking along the street. She stopped and wondered what reason anyone would have to take a walk at this time of night in such an early bird neighborhood.
It was then she heard the shrill of the smoke detectors. Chest tightening, she bolted for the door.
“Mom! Dad!” she screamed and tumbled inside, spotting them almost immediately as they ran down the long upstairs hallway.
Not again. Please not again, she begged, as she fought her frozen legs to make them move up the stairs. The smoke detectors shrieked in her ears. Or was that the shrieking coming from her lungs?
Her parents yelled her name as they reached for the bedroom door. She couldn’t stop gasping for air long enough to tell them to stop. She wasn’t in there. Didn’t they know? They needed to get out of the house.
Couldn’t they smell the smoke?
Just like each time, her viewpoint from the middle of the stairs showed her the yellowish air sucking under the door to her bedroom. Although trying to use the railing to give her momentum, every part of her felt like it was in molasses. She cocked her head to the side, drawing her eyebrows together. Her gaze locked on the eerie breeze.
Almost simultaneously, her mother rotated the knob as her eyes turned and met hers. For that fraction of a second, her mother understood the fear on Brie’s face, but it was too late. It was always too late. As she opened the door, Brie had just enough time to witness her parents engulfed in flames before the explosion blew her back and everything went dark.
* * * *
“Brie, wake up. Wake up, Brie. You’re dreaming.”

Larsen review of RT Wolfe’s Black Creek Burning:--
“I thoroughly enjoyed RT Wolfe’s masterful debut novel, Black Creek Burning.  Written with confident expertise on a variety of topics such as landscaping and home remodeling, I got wrapped up in the engaging storytelling of this wonderful tale of love, danger and suspense.  Along the way I completely fell in love with hero Nathan as he patiently transformed the heroine Brie from an icy self-proclaimed independent into a woman willing to accept the love of a strong man and a family in need of a mother.  The details were delicious, the settings were masterfully painted, the mystery was a stumper and the romance was beautifully satisfying.”
-Laurie Larsen,
--Author of Preacher Man, 2010 EPIC Award Winner

Please welcome R.T. Wolfe to Sweet Not Spicy by leaving a comment. 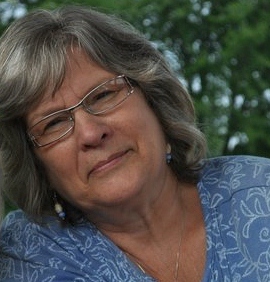 An avid reader, Roseanne Dowell and writes various types of romance - paranormal, contemporary, and mystery. She has several books published as well as over 40 articles and short stories published in magazines such as Good Old Days, Nostalgia, and Ohio Writer and several online publications. Besides teaching writing courses for Long Story School of Writing www.lsswritingschool.com ,she also taught two writing courses for the Encore Program at Cuyahoga Community College.

Roseanne lives in Northeast Ohio and where she enjoys life as a wife, mother of six, grandmother of fourteen and great grandmother of one.  Besides writing, Roseanne enjoys embroidery and quilting, especially combining the two. She also enjoys blogging, tweeting, facebooking and posting on various writers groups. 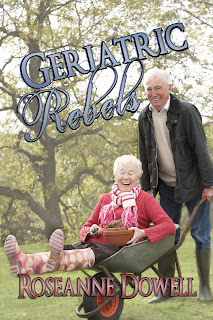 Roseanne Tells Us About Geriatric Rebels:
The idea of this book first came to me when my father was in a nursing home. Unfortunately, he couldn’t get out of bed, but he did refuse to eat or take meds. After years of working as a tile setter, it had taken its toll and he suffered with arthritis in his knees and back, so much so that he wasn’t able to stand or walk. I noticed during several visits a little old lady walked past his room and always stopped and looked in. She never spoke, just looked at us for a minute and went on her way. Something about her reminded me of my mother. Maybe it was her curly, silver hair, or her slight build. Whatever it was, she stuck in my mind and years later when I decided to write this story, she naturally came to mind. This story actually had several different drafts. The original was a nonfiction assignment for a writing course I took. It was strictly about my father and his incapacity to get out of bed. From there it changed to fiction, and I brought Elsa into the story.  While Elsa is based on my mother – especially her love of playing jokes and he sense of humor, my mother predeceased my father by three years. And while Mike is based on my father, my dad didn’t have this sense of humor. While I could picture my mother doing this stuff, even in a nursing home, I honestly couldn’t picture my dad. He had a sense of humor, but not one as wild as my mom.

Where I came up with these ideas, I’m not quite sure. I think Mike and Elsa thought of them. The story just took off on its own and flowed. I love when a story does that.
Geriatric Rebel is the story of Mike and Elsa. Seventy-two year old , Mike, forced to stay in the nursing home for therapy. He refuses to take his medicine, refuses to get out of bed, and won’t cooperate with the nurses. At least not until he meets Elsa.  Seventy year old, Elsa is left in the home because her son took his family on a vacation. After an explosive meeting, she team up with Mike and the nursing home is never the same. Later they discover deception and fraud. Can the two find happiness together?

Please welcome Roseanne Dowell to Sweet Not Spicy by Leaving a Comment.

Why Her Handyman? By Morgan Mandel 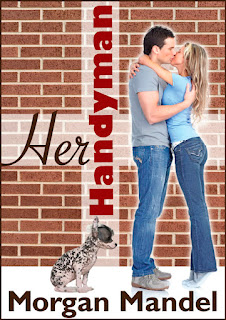 One of the hardest things to do is to come up with a good title for a book. And, it better be a good one, or no one will want to buy the book, no matter how good it is. The title needs to represent what a book is about. The wrong title can offer the wrong impression and turn a reader off. The same can be said for covers, but today I'm sharing my thoughts on titles. When deciding on a title, I usually Google and also check Amazon to see if someone has already used that title.

It's perfectly legal to use a title already taken by another author for another book, but doing so can lead to confusion. That's why I try to choose one that's unique.

The hero of the story is a handyman. So, I did my usual searches. First, I tried My Handyman, but someone already had that. Also taken was Handyman.

Then I started thinking. Jake, the hero in Her Handyman, is engaged. Since this story is written in the third person, I kind of liked the idea of a double meaning for the title. When calling Jake her handyman, the heroine, Zoe, could be referring to the fact that Jake has a fiance and he's not Zoe's but hers, meaning Angelina's.

Then again, Zoe wants very much to be able to refer to Jake as her (own) handyman.

I searched and found no books with that exact title, although I did find one or two with part of the title which included the words, her handyman, but they weren't first on the title, so I didn't count them.

Another concern was where the first word of the title lands in relation to what letter of the alphabet it begins with. H turned out to be 8th, which isn't too bad. If I do decide to put the book into print and it lands on a bookstore shelf, it most likely won't be on the bottom.

So now you know how I came upon Her Handyman as my title.

Anyone else want to share their titles and how they got them?